Fibroids, or myomas (also known as leiomyomas, or fibromyomas) are growths, or benign (non cancerous) tumours that form in the muscle of the uterus. Up to 40% of women over the age of 40 years have fibroids and as many as 3 out of 4 women develop fibroids in their lifetime.

Fibroids can cause heavy bleeding, extended bleed and painful periods. They can also cause infertility, miscarriage and premature labour. In many women, they will not cause any problems at all.

It is not known why fibroids develop, but it is thought that oestrogen and progesterone, may be a big part in their development. There is also a hereditary link. If someone in the family has had them, there is a highly likelihood of their development in a woman. Fibroids usually don’t grow in girls before puberty and usually don’t develop in women after menopause. Pre-existing fibroids usually stop growing and can even shrink in women after menopause. But they can still cause ongoing issues that may require their removal.

Treatment depends on the size, number and location of the fibroids, but can include medication, procedures done under local anaesthetic, ultrasound procedures and surgery. Fibroids rarely become cancerous.

While many women will have no symptoms, when symptoms present, fibroids can cause the following:

If periods are heavy or prolonged this may lead to anaemia. Often the symptoms are the same as women who have Adenomyosis, or Endometriosis.

Fibroids are categorised by their location, which includes: 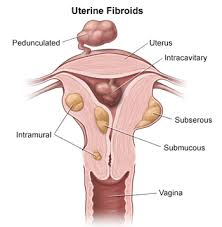 Fibroids can vary in size ranging from 1mm wide, right up to 25cm. Depending on their location and size, some fibroids need to be removed. If some fibroids are left and a pregnancy occurs, they can grow in size and actually compete for space in the uterus and crush the baby. I’ve actually seen this happen. It is also why I often recommend removal of some fibroids, especially for patients having trouble conceiving. 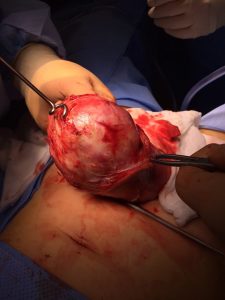 (A fibroid as big as a baby’s head)

Fibroids can cause a range of complications, including:

Fibroids can usually be detected using an ultrasound, or an MRI. They can also be diagnosed via surgical intervention with a laparoscopy and hysteroscopy.

Treatment depends on the size, number and location of the fibroids, but can include: